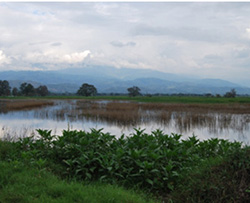 The Sonso Lagoon, an old oxbow of the Cauca River, is one of the only remaining wetlands in the Cauca Valley. Within this 600 hectare Reserve, 162 bird species have been recorded.