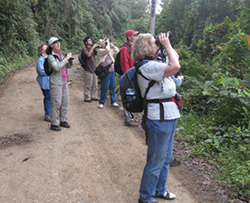 El 18 is a place along the eastern slope of the western cordillera and lies along the highway to the port of Buenaventura. It is categorized as a sub Andean cloud forest where tanagers abound. We will bird along a small gravel road and walk approximately 4 kilometres. Besides the more common Beryl-spangled, flame-rumped, Blue-grey, Saffron-crowned, Golden, Blue-capped, Golden-naped, Scrub, Fawn-breasted, Purplish-mantled and Blue-necked Tanagers, we will also look for the endemic Multicoloured Tanager, Blue-naped and Chestnut-Breasted Chlorophonia, Black-billed Peppershrike, Red-headed Barbet, Green Honeycreeper, the endemic Colombian Chachalaca, collared Trogon, and of course the gourgeous Crimson-rumped and Emerald Toucanets. At the end of the walk, we will visit a hummingbird paradise. The owners of a small farm have set up feeders where hundreds of hummingbirds congregate. Possibilities include White-necked Jacobin, Brown Violetear, Golden-Breasted Puffleg, Purple-throated Woodstar, Booted Racket-tail, and Long-tailed Sylph. Throughout the walk, we'll be able to see beautiful orchids, bromeliads and insects (all inoffensive). 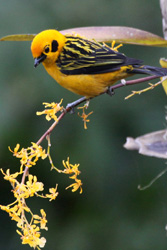 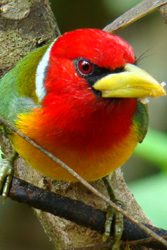 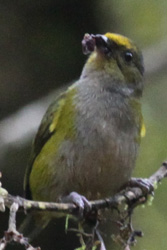